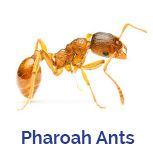 The ant Monomorium pharaonis (Linnaeus) is commonly known as the Pharaoh ant. The name possibly arises from the mistaken idea that it was one of the plagues of ancient Egypt (Peacock et al. 1950). This common household ant is distributed worldwide and carries the dubious distinction of being the most difficult household ant to control.

These ants will eat almost anything, including insects, seeds, honeydew, honey, bread, meats, nuts and cheese.

This ant infests almost all areas of a building where food is available and infests many areas where food is not commonly found. Pharaoh ants have a wide preference in the types of food consumed. In infested areas, if sweet, fatty, or oily foods are left uncovered for only a short period of time, one can likely find a trail of Pharaoh ants to the food. As a consequence, they cause much food to be discarded due to contamination. Owners have been known to consider selling their homes because of the ravages of this pest (Smith 1965).

Control of Pharaoh ants is difficult, due to their nesting in inaccessible areas. Treatment must be thorough and complete at all nesting sites, as well as the foraging area. Thus, treatment must include walls, ceilings, floor voids, and electrical wall outlets. Baits are now the preferred method of control for Pharaoh ants and several baits (insecticides) are labeled for indoor ant control. A Pharaoh ant infestation of a multifamily building requires treatment of the entire building to control the infestation. Ants nesting on the outside may be controlled by also using a perimeter barrier treatment (Smith and Whitman 1992).

Baits cannot be placed in just any location and be expected to work. Pharaoh ant trails and their resources (both food and water) must be located for proper placement of baits and effective control (Klotz et al. 2000). Non-repellent baits (such as boric acid, hydramethylon or sulfonamide) should be used, as repellent baits can worsen the situation by causing the colony to fracture and bud. As a result, ant activity will briefly diminish as the new colonies establish, then become a problem as the foragers resume activity (Smith and Whitman 1992).